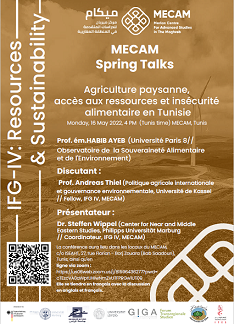 [Small-Scale Farming, Access to Resources and Food Insecurity in Tunis]

Tunisia depends on foreign countries for more than 50% of its needs in food, particularly for cereals. This is the result of extractivist and mainly export-oriented agricultural policies implemented during the colonial period and continued until today. These policies have led to the depletion of natural resources, including water and land, and biodiversity. They are also at the origin of the various mechanisms and processes of dispossession of the small peasantry, its marginalisation and its impoverishment, which has been continuously worsening for a long time.

The conference will be held in French with the discussion in English and French. It will take place in the premises of MECAM, c/o ISEAHT, 27, rue Florian – Borj Zouara (Bab Saadoun), Tunis,