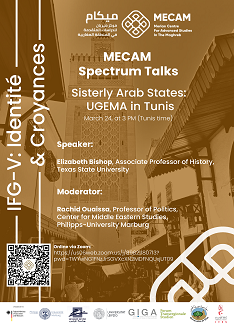 The UGEMA, L’Union Generale des Etudiants Musulmans Algeriens (1955-1962) organized a strike for 19 May 1956, at a time when the ratio of native residents to European settlers was 9:1, yet the ratio of native students to European classmates was 1:9. UGEMA strike organizers (themselves students) identified alternative locations for students to continue their academic work and professional growth. Establishing a section of UGEMA in every nation where Algerian students matriculated, and diplomatic offices in Algiers and Cairo as well as in Paris, the UGEMA grew to become a large, diffuse, and diverse organization within its first year. Among these, “sisterly Tunisia” became important during the first years of that neighboring nation’s independence; in Tunis, Algerian students made a traditional house in the medina their residence hall, and two nearby restaurants their community dining halls. Derived from those members’ documents which referred to Tunis as “sororal,” this presentation follows debates about use of the letter “M” to distinguish their identity, mapped across concepts of family and femininity which connected nodes of solidarity across jurisdictions’ boundaries. Eventually, the UGEMA emerged as one of the founding institutions for Algeria, when student-leaders took on responsibilities within the People’s Democratic Republic, grounding maghreb-based analysis and openness to chosen families in response to Suad Joseph’s “Brother/Sister Relationships: Connectivity, Love, and Power in the Reproduction of Patriarchy in Lebanon” (1994).