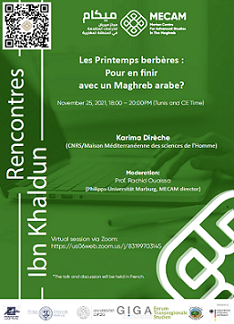 The Berber Springs: To put an end to an Arab Maghreb?

For this meeting Ibn Khaldun, Karima Dirèche (CNRS / Maison Méditerranéenne des sciences de l’Homme), contributor in Entanglements of the Maghreb: Cultural and Political Aspects of a Region in Motion, speaks on “Les Printemps berberères: Pour fin fin avec un Arab Maghreb? “. It focuses on Berber expressions and assertions that were never seen before in the 2011 uprisings in the Maghreb, reflecting new demands for freedoms and the rule of law. By studying the role of Berberism historically considered to be marginalized in collective protests and with reference to the 1960s and 1970s, Karima Dirèche examines the growing politicization and resistance of the Berbers as an expression of the socio-cultural and political entanglements in the Maghreb, which have particularly reflected the ethnic and linguistic plurality of Maghreb societies since 2011. This meeting takes place on Thursday, November 25, 2021, 6 p.m. – 8 p.m. (Tunis and Central European time), via ZOOM . and is moderated by prof. Rachid Ouaissa (Philipps-Universität Marburg, director of MECAM).