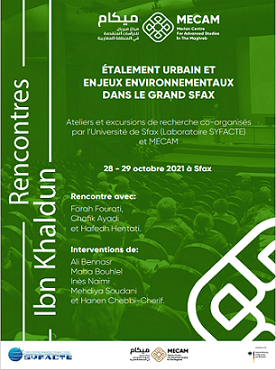 In October 2021, Sfax – Tunisia’s second largest city – made negative headlines for an escalating waste crisis, as the long overdue closure of the city’s only dumpsite resulted in trash piling up on its roadsides and in illicit waste burning thickening the air. Teaming up with the Geography research lab SYFACTE at the University of Sfax, the IFG II “inequality and mobility”, organised a two-day long Rencontre Ibn Khaldoun on “urban sprawl and environmental challenges in Greater Sfax”. Two senior researchers of SYFACTE, Ali Bennasr and Maha Bouhlel, set out how urban development in Sfax was always closely entangled with industrial development, and how socio-economic inequalities have long mapped onto environmental injustices in the city. Research presentations by early career researchers from Sfax University then focused on different waste economies in the city, and a subsequent roundtable discussion with environmental activists from Sfax and a representative of the municipal council connected histories of pollution and environmental injustice to the on-going waste crisis in the city. The event was co-organised with the Deparment of Geography and took place over two days, on the 28th and 28th of October 2021, at the University of Sfax.