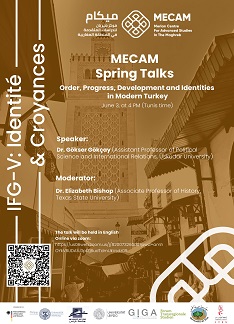 *Abstract* The last two centuries of Modern Turkey can be described as a history of a series of identity crises. Since the Ottoman Empire, key members of the Elite have experienced a constant need for new orders with response to these crises. The first of these crises coincided with the Age of Revolutions in Europe and centered around the military and central state institutions in the late eighteenth century. However, later it was found out that the crisis was not limited to the institutions structure and the way in which they were governed. The identification of the Ottoman subjects became a central concern, especially with the Greek and Egyptian crises. Despite the existing millet system, a new identity had to be conjured. During the Tanzimat period, which literally meant Re-ordering, the Ottoman identity became a highly contested issue among the Muslim, as well as non-Muslim subjects of the Ottoman Empire. The crisis has deepened with the emergence of Turkish nationalism as a counter-movement to nascent nationalisms in the Ottoman Empire in the image of a “progressive” movement. The Union and Progress committee self-described itself as the driving force to resolve the crisis in the Ottoman State and treated its subjects as passive receivers of its policies. In this talk, I aim to underline continuities and ruptures within these operating words of identity, order and progress, not just during the late Ottoman era, but also within the first century of the Republic. The existing fault lines in contemporary Turkey could be traced back to these crises and how the former solutions to them are resurface over and over again throught the Twentieth Century in Turkey.

Gökser Gökçay is currently assistant professor and Deputy Head of the Department of Political Science and International Relations at Üsküdar University, Istanbul. In 2017-18, he served as a Fulbright Scholar-in-Residence at Texas State University where he gave lectures about Modern Turkey and Global Cold War. He finished his PhD at Dokuz Eylul University with a dissertation on US aid programs in Turkey (1945-1960). He received his B.S. in Political Science from Middle East Technical University and M.S. in International Relations from Ege University, Turkey. His research has been funded by the Harry S. Truman Library Institute, the Eisenhower Foundation, the Gerald R. Ford Presidential Foundation, and more recently, the Lyndon Baines Johnson Foundation. His recent research focuses on the intersection of the history of development with the Cold War and the historiography of International History.