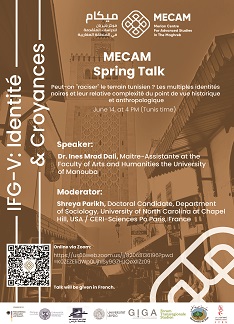 [Can the Tunisian field be racialized ? Multiple black identities and their relative complexity from an historical and anthropological point of view].

While the “black Tunisian” population today is made up of both descendants of slaves and immigrants, the current social discourse and the discriminatory images conveyed systematically accuse these Tunisians of a slave ancestry, not only do not make such distinctions, but have ended up, because of this racialization since the end of the 19th century, giving rise to a devaluing image for these populations in a global way.
At the same time, more and more new sub-Saharan immigrants are entering Tunisia and settling there more or less permanently, in situations of legal, economic and status insecurity that are quite visible and significant.
Faced with this multitude of identities, backgrounds and origins that characterize the “black” population in Tunisia, and in view of the way in which, since the 19th century, administrative and political authorities have managed and considered the various existing black social categories and the consequences of such considerations, it seems important today to question the relevance of the use of racializing concepts by social scientists, even though it seems inevitable to resort to conceptual tools that allow for the apprehension of these identities, which are often considered as “separate”.

Dr. Ines Mrad Dali is a Maitre-Assistante at the Faculty of Arts and Humanities the University of Manouba. Dr. Mrad Dali obtained a doctorate in Social Anthropology and Ethnology at the Ecole des Hautes Etudes en Sciences Sociales (EHESS) in Paris. Her work has been devoted to the study of the Black communities in Tunisian society, from the abolition of slavery until today.

The conference will be held in French with the discussion in English and French. It will take place at the MECAM premises, c/o ISEAHT, 27, rue Florian – Borj Zouara (Bab Saadoun), Tunis, as well as Online via zoom: